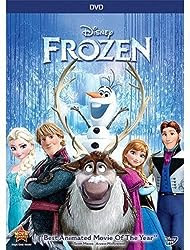 The animated film Frozen (2014) tells an amazing story of Elsa the princesses whose icy powers have trapped the kingdom of Arendelle in eternal winter, and Elsa’s sister Anna, a fearless optimist, sets off on an epic journey – teaming up with rugged mountain man Kristoff and his loyal reindeer Sven to find Elsa and save the kingdom (DeAlan Wilson for ComedyE.com at IMDb).  Since released in 2014, Frozen has earned more than $1.2 billion at the box office.  When the DVD was on sale at Costco with $5 discount last year, I saw almost every little kid (mostly girls) had one in hand at the checkout.  My 2nd-grade daughter said one of her classmate watched Frozen more than one hundred times. Why are little kids so obsessed with Frozen?

According to Kia-Keating and Uhls (2015), young kids like preschoolers and 1st/2nd graders possess super high imaginations, envisioning the world as a wondrous place with full of possibilities, excitements, and adventures. Such imagination allows children to respond to stories like Frozen tirelessly.  Kia-Keating and Uhls also mentioned that “Preschoolers are deeply entrenched in their families and tend to demonstrate a strong in-group attachment, meaning that they favor members within their social circle.”  Thus the genuine connection between Elsa and her sister Anna is specially appeal to these young viewers.  This film serves as reinforcement for young kids’ strong attachment to their families.

A great value of Frozen for learning developmental psychology is the demonstration of childhood isolation.  In this film Elsa experienced a lot desperation and isolation when she had to be locked away in her room as a girl and hide herself in a remote castle as a woman.  Because of the isolation, Elsa’s personality becomes quite complicated.  As described by DeAlan Wilson, from the outside Elsa looks poised, regal and reserved, but in reality, she lives in fear as she wrestles with a mighty secret-she was born with the power to create ice and snow.  According to Skuse, Bruce, Dowdney, and Mrazek (2011). Children’s social isolation is often caused by traumatic and uncontrollable events such as Elsa’s icy power.  Children affected by such events can evidence post-traumatic stress disorder (PTSD) and internalizing disorders. Rates and types of psychopathology are similar to those in other children who bereaved family tragedies, with a raised risk of depressive disorder up to 2 years after the event. An increased risk of suicidal behavior and higher levels of persistent anger, guilt, shame and social isolation are also reported.

Kia-Keating, M., & Uhls, Y, (2015). The psychology of why little kids are completely obsessed with ‘Frozen’. The Washington Post.  January 6, 2015. Retrieved from http://www.washingtonpost.com/posteverything/wp/2015/01/06/why-little-girls-are-so-completely-obsessed-with-frozen/